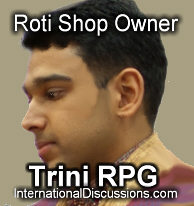 "Thank you, yes there are drinks available here, although I don't have much in storage, I will have to buy more later".

Felipe goes to his office room and he sits down on his chair and he turns on his laptop, he goes to 'Twitter', and checks any replies that are going on there, then he notices something, he sees the Movie star's account and he clicks on it.

Then he sees the messages that she put about what happened to her a few weeks ago and about this 'person' who looks like a 'rat' stop by to her house, Felipe is surprised that the movie star will put this on the internet, not also that, the people who 'saw' it are spreading the message to another people, this made Felipe angry, he thinks that the movie star is embarrassing him for something that he didn't realize that it happened before.

Felipe unlocks the door of his shop and he thought to himself "It looks like I am late this time".

"Well, it is certainly a busy day" The owner thought to himself while looking around the shop as he receives a call from one of the employes saying that he is taking a day off from his work shift today. So Felipe will take charge of the cashier today since there is not much things for him to do for now.