Coat of Arms of Trinidad & Tobago 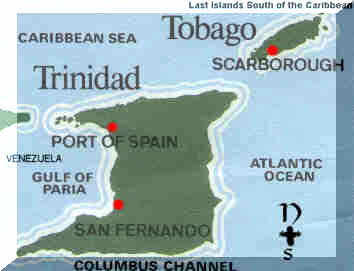 I have been getting calls for the Trinidad & Tobago Embassy in Washington, but I merely was authorized to designed the old site. I have moved the content here as an archive and for updates.

Trinidad & Tobago are the last islands South of the Caribbean. They were discovered by Columbus on his third voyage. It is a Republic and received its Independence from Great Britain on the 31st August, 1962.

The population of the combined countries is approximately 1.3 million. Its main revenue is from oil and natural gas. The peoples are made up of African, East Indian, Syrian and European descent. A small population of Asians is also on the rise. Mixed races is very apparent.

The official language is English (Queen's), although a local dialect is widely spoken and accepted. Other languages include: Spanish, French, Hindi (Urdu), Patwa, etc.

Planning A Caribbean Cruise?
Why not plan your cruise around Trinidad & Tobago. Contact your Caribbean cruise travelagent for arrangements.

Basically, Trinidad & Tobago is a friendly nation seeking peace and good will with all peoples from all walks of life. The country has been able to show this within itself because of its multiracial, multiethnic, and multi-religious groups living in harmony.


QUOTE
Location:
Caribbean, islands between the Caribbean Sea and the North Atlantic Ocean, northeast of Venezuela

There are many colourful and informative leaflets, maps, and brochures available for free to those interested in learning more about Trinidad & Tobago. Feel free to contact the Embassy.

When you mention the Caribbean or an island in the Caribbean to someone abroad (Especially North America or Europe) they immediately think of a Caribbean cruise, beaches, hotels and so forth. It is true that Trinidad & Tobago is a great tourist destination, but we are also the leading Caribbean producer of oil and gas which has earned us a reputation as an excellent investment site for international businesses.

Tourism is a growing sector, although not proportionately as important as in many other Caribbean islands. The economy benefits from low inflation and a growing trade surplus. Prospects for growth in 2004 are good as prices for oil, petrochemicals, and liquified natural gas are expected to remain high, and foreign direct investment continues to grow to support expanded capacity in the energy sector. The government is coping with a rise in violent crime.(Cia.org)

In the past, the Football team known as the "Soca Warriors" Played in the Germany 2006 World Cup. Together with local artistes and even dancers (Shiv Shakti) this helped to establish a fantastic image to the word.

Some countries require a visa to enter Trinidad & Tobago and others do not. The visa is obtained through the embassy and costs around $15 US (Call to verify). However, everyone needs to have their travel documents in order: