Gwynedd Alchemy
Description: Bruconero the Artificer heard that a new settlement is being built in this valley and I'm just looking for a place to set up my trade. I'm an alchemist and creator of wonders that go beyond the imagination! An eccentric inventor, someone would say.
Post Date: 12th Jun, 2013 - 3:28am / Post ID: #
Quote

"That's good news", says Bruconero in a satisfied tone, "Specially the part about freshly baked bread! I love bread when is still hot from the oven".

While he talks, a strange orange smoke starts to fill the hut bringing the strong smell of chemical agents to the nose. The alchemist smells the air with concentration and, after a while, states: "Are you already baking some bread? Maybe I'm so eager to eat it that I can feel its aroma already? Oh no! This is my new experiment! I forgot I was mixing some elements in a beaker when you arrived". This said, he runs quickly to the back of the hut to take care of the boiling potion. 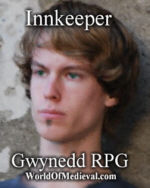 Felipe waits for Bruconero to solve the problem and when he comes back he will say to him "Hey What is that potion you are making Bruconero?".

"Oh, nothing special. Really", answers Bruconero to Felipe. "Is a mixture to make my socks become white again, a kind of powerful soap. I can't clean my socks with normal soap: instead of the socks becoming clean usually is my soap that becomes dirty".
After saying that, he shows Felipe the socks he is now wearing: they are black from dirt and have a big hole through which one of the alchemist's finger stick out.

"I'm having a deep creativity crisis", decides Bruconero assessing the work he did during the last week. "I need to get back to my mixtures and potions or else I'll become lazy if I only keep enjoying the wind and the warm sun of this valley".
He looks at his hut: a thick layer of dust covers the floor and most of his equipment is still inside the crates he used to bring it in his new house.
"First, clean up the place!", he states trying to organize the activity of the next few days. He gets outside looking for some large leaves that, in his opinion, will work much better than the old broom he has at home.

Bruconero collects several fern leaves, he ties them together as to form something similar to a green octopus with a central tubular structure sticking out from the middle and then secures the leaves to a central handle, obtained from a tree branch. He collects some rags and adds them in the inner part of the octopus of leaves as to form two circles: the outer one being leaves and the inner one being rags so he can sweep and mop with a single gesture. The leaves will move the dust and the wet rags will then wash the stone floor.
"More efficient than just a broom!", he comments to himself. "Now I only have to find somebody that can use it to clean my hut: a maid. But I can test it myself first". Taking a wooden bucket full of water, the inventor puts to work his last creation and in a few hours his hut is not only clean but tidy and ordered as well.
Exhausted, he lays down for a nap.

With his first village invention being a success, Bruconero finally decides to get back to his normal activity. "Useless keep waiting for a shipment that is being delayed over and over", he decides. "Get to work first, think about new supplies later". He sets out to pay a visit to his neighbors, trying to understand if something is needed in the village.

Felipe goes and he knocks the door of the Alchemist's home and he says "Hello? Anybody there?".

Bruconero gets up from his bed with some effort. He quickly wears some decent clothes and limps to the door. "Felipe, it's you!", he salutes when he sees the innkeeper. "Sorry for making you wait so long. I'm not well lately: I had an accident to my right foot as you can see and this has hindered my activities these last weeks. I hope to be back in shape soon and be able to work again. How is my special broom working for you? Fine? Do you need something else?".