CNN Exclusive: The Islamist radical group ISIS is so brutal that even al Qaeda keeps its distance. Now, a month after ISIS was driven out of the Syrian town of Addana, CNN's Arwa Damon reports on the bloodshed and grief the group left behind.

ISIS arrived in Addana about a year ago, initially welcomed in the conservative town by Islamist fighters. But within a few months, ISIS had entrenched itself and begun exerting its harsh order through what one fighter calls "Terrorism and punishment."

Residents show Damon where ISIS members carried out executions, leaving bodies to rot for all to see.

At a former ISIS prison, bullet holes riddle the walls. Most of them are at the same level -- the average height of a man. "Those are mostly from the executions," Says Abu Jamal, another fighter. Ref. CNN

Image below from the BBC: 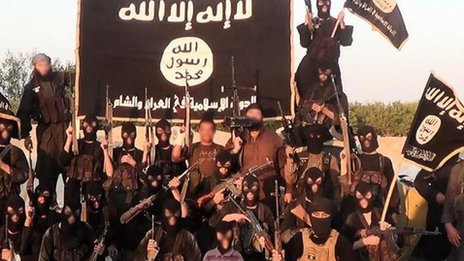 About (20) gunmen affiliated to what is so called the Islamic State of Iraq and Syria were killed in Fallujah city of Anbar province.The Ministry of Interior declared in a statement received by IraqiNews.com Ref. Source 8


The High Commission for Human Rights in Iraq has confirmed that the Islamic State in Iraq and the Levant has begun imposing the jizya or poll tax on Christians in Mosul, according to the Assyrian International News Agency.
Source

The man who could stop a war

THERE is one man in Iraq who could stop terror group ISIS in its tracks without a drop of blood being shed. Now pressure is growing for him to act. Ref. Source 8

Abu Bakr al-Baghdadi called on Muslims to immigrate to the "Islamic State", saying it was a duty. He made a "Special call" For judges, doctors, engineers and people with military and administrative expertise. Ref. Source 3

Isis threaten to plant bombs at 'every American embassy':

One ISIS post said: "If America attacks Iraq every American embassy in the world will be exposed and attacked with car bombs." Another vowed: "If the United States bomb Iraq, every American citizen is a legitimate target." Ref. Source 1

ISIS - NOT HAMAS - Claims Credit for Attacks Against Israel:

A new Palestinian jihadist group pledging allegiance to the Islamic State (Formerly known as ISIL) [or "ISIS"] has claimed responsibility for the killing of three Israeli teenagers last month in the West Bank, as well as other recent deadly attacks against Israeli soldiers and civilians. Ref. Source 3

We break from ISIS ISIL to share caption from one historian to you:

TOPIC: ISIS - ISIL
« Next Oldest | Studies of Islam | Next Newest »

Wardogs Introduction
By Wardogs 2 Hours Ago

If War Broke Out Would You Rat...
By Wardogs 3 Hours Ago
Idaho Public Transport
By News 3 Hours Ago

Evelyn the Duchess
By Evelyn 3 Hours Ago

Do You Know What To Do In A Nuclear Attack?:

By Cyoa 13 Hours Ago
China vs USA:

The role of its Army, Politics, and Status in the World. By News 6.7 Days Ago
China Navy:

Beware the new Naval power, they are planning to come on stream with big naval might to match their ground forces. Chinese Aircraft Carrier - Chinese Navy By Lori 6th Feb, 2020 - 9:40pm
USA vs North Korea:

This Thread is about the North Korean Military itself - the kind of army, navy, and air force they have. By Wizard 15th Jan, 2018 - 9:36am
Japan vs North Korea:

Preparing For China. China is growing their military. China Military Technology - can it keep up with the US? By Abnninja 5th Mar, 2017 - 5:25pm